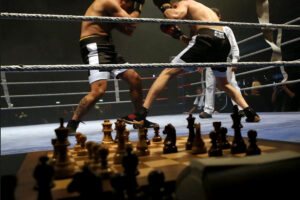 Clausewitz’s “fog of war” phrase aptly describes the media deluge – or barrage – that the Ukrainian war has subjected us to since February 24, 2022. Both camps are fighting a propaganda war aggravated by social media. The Ukrainians have the upper hand: a wealth of pictures (taken by civilians and reporters) are available on their side, far less on the Russian side (no smartphones for the soldiers, no civilians, few reporters). Among other effects, this results in an overabundance of visible destroyed Russian vehicles. What Western people (we included) are shown, however, is only part of the real picture. Besides, the use of algorithms means that greater weight is given to information that bolsters pre-existing points of view. Like the Ancient Greek Diagoras, we all like to pinpoint the explanation that fits in with our beliefs, but in war times the overload of data stifles reasoning. It is hard to keep a critical distance and remain cold-headed enough to understand what is going on… and what we can do about it. Even more so if we happen to live in a belligerent or cobelligerent country.
Read the rest of this article.